The Story Behind the Cause 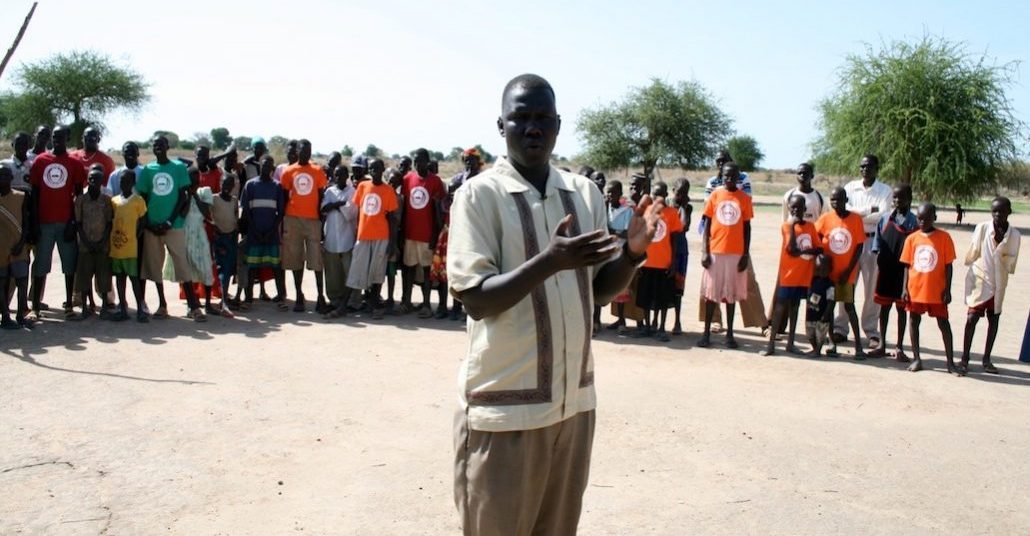 Gabriel Bol Deng, our Founding Executive Director, has overcome unbelievable obstacles in life. He was 10 years old when North Sudanese militiamen led a violent attack on his village of Ariang in South Sudan in 1987. He fled into a forest, not knowing the fate of his parents or siblings. After his escape, Gabriel embarked on a perilous four-month long journey, crossing the Nile River and untold miles of desert; surviving disease and devastating hunger to reach the Dimma Refugee Camp in Ethiopia.

In 1988, he had a life-changing dream in which he was reminded of his parents’ lessons as a young boy: that he could move mountains with the power of hope. This mantra strengthened him to overcome famine and a paralyzing snake bite. More importantly, it gave him a thirst for knowledge, which inspired him to pursue education. Gabriel was 13 years old when he began his formal education, which involved writing on cardboard with pieces of charcoal under a tree at Dimma Refugee Camp.

Four years later, he fled from violence again, leaving Ethiopia and traveling on foot to Kenya’s Kakuma Refugee Camp. There, Gabriel completed his primary and secondary education. In 2001, Gabriel came to the United States as part of the Refugee Resettlement Program and settled in Syracuse, New York. His desire to further his education led him to eventually earn an M.Ed. in Math Education in 2012 from Le Moyne College.

On May 22, 2007, Gabriel returned to his home village of Ariang for the first time in over 20 years. After seeing students learning in make-shift schools under trees; without trained teachers, instruction materials, or basic supplies, Gabriel was determined to transform the poor learning environment into a permanent learning facility.

The 2007 visit to South Sudan helped Gabriel realize the urgent needs of his community. This spurred him to found HOPE for Ariang Foundation as a vehicle to help rebuild Ariang village after years of devastating conflict, a dream that he nurtured since his return from that trip.

To begin, Gabriel sought the help of his Le Moyne College professor, Dr. J. Barron Boyd for an initial investment to purchase 200 t-shirts to get his dream off the ground. He would use the sale profits to raise funds for the construction of the Ariang School. Boyd reluctantly agreed but when Gabriel left his office, he turned to his assistant and said, “We’re going to have to figure out something to do with 190 t-shirts because there are going to be a lot of extras!”

Thousands of t-shirts, hundreds of speaking engagements, and a powerful award-winning documentary film later, Boyd’s initial skepticism has been totally erased. HOPE for Ariang’s first project involved drilling six hand-pump water wells in and around Ariang in 2009. These wells provide clean water to the community which reduces incidences of water-borne diseases like Cholera and also increases opportunities for girls to attend school who culturally spend their day fetching water.  HOPE for Ariang completed the construction of Ariang Primary School building and welcomed the first group of students into a brand new school building in May 2011. Today, over 650 students are learning at the school.